With the Holiday Season firmly upon us, I thought I'd push the boat out and post three quick book reviews, in case anyone is looking for a present idea...


First up is a fantasy classic you may not have heard of: Lud-in-the-Mist by Hope Mirrlees. My copy of this book has a Neil Gaiman blurb that says:

The single most beautiful, solid, unearthly, and unjustifiably forgotten novel of the twentieth century ... a little golden miracle of a book

Now there's a certain amount of hyperbole there, but he's really not far wrong. This book is a gem. It's a fantasy novel originally published in 1926, eleven years before Bilbo Baggins hurried out of his round, green door. It's also a long way in scope and theme from the epic fantasy of Tolkien and his followers. Perhaps it's really a "fairy story". Or it might be a murder mystery. Certainly there are no armies or Dark Lords in sight. The book's concerns are smaller, but dramatic enough in their own way. It concerns itself with the staid and proper city of Lud-in-the-Mist, whose citizens are horrified to find that "fairy fruit" is being smuggled into their town, down the river Dapple from the Land of Faerie. The citizens never mention Faerie or its - literally - forbidden fruit, trying to convince themselves that such unsettling things don't exist.

The fruit is dangerous, subversive even: it makes people waste away their lives in all manner of unproductive ways: writing, playing music and, you can be sure, much else besides. The modern reader might see the fruit as an analogue for drugs, but equally it represents the role of beauty and art in our over-controlled, rational lives.That said, Mirrlees is rather ambivalent about the merits of Faerie. We are never actually taken there; it remains an unknown in the text. Faerie as the id to Lud-in-the-Mist's ego perhaps? This is a story of ideas as much as anything. This isn't just another "fantasy" story, and that's wonderfully refreshing.

The book is elegantly, charmingly written. It's as if Virginia Woolf sat down to write The Hobbit and not John Ronald Reuld. Or as if Tolkien had had a crack at a Barchester novel. Or something. I do wonder whether it would struggle to get a publisher these days, though. It starts slowly and proceeds at a gentle pace much of the time.

Still, fans of fantasy and, you know, good writing should seek it out. Available from Amazon and all good book stores.


Next up is a book that isn't fantasy and isn't really science fiction - but which readers (and writers) of science fiction will love. It's Physics of the Impossible by Michio Kaku. 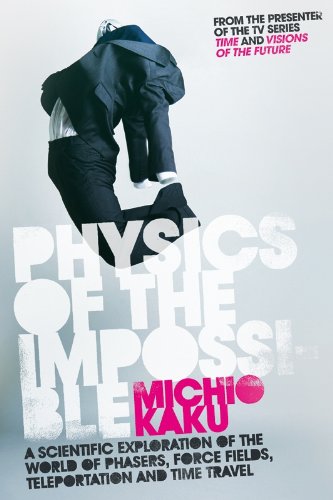 In case you're not familiar with him, Kaku is a theoretical physicist, who here takes a serious look at some of the tropes and devices commonly used in science fiction (time travel, phasers, teleportation etc.) But this isn't one of those works that sneers at the crazy ideas of those writer types. On the contrary, Kaku is clearly a fan and demonstrates a pretty good knowledge of the genre. He says himself it was a boyhood delight in the genre that turned him onto physics in the first place.

The result is that there's a treasure-trove of solid scientific material in here for science fiction writers to draw on. Not that I'm that hung up on strict veracity to science in science fiction myself, as some writers and readers clearly are. Story always wins, I think. But the more you diverge from believable science, the more likely you are to alienate a section of your potential readers. Plus I also found that reading the book gave me several great ideas for new stories.You could do a lot with gamma-ray bursters, for example.Or nanoships. Or antimatter rockets.

Kaku's writing is always clear and he obviously knows what he's talking about. And it's surprising just how much stuff actually probably isn't impossible. Time travel? FTL? Invisibility? Kaku sees all these as ultimately possible, in that they don't appear to contravene any known laws of physics. We just can't do them yet. He returns to the SF canon again and again and then explains how, actually, quite a lot of it just might work.

At times I would have liked him to explain things a little more. He mentions, for example, that you can't use quantum entanglement to communicate instantaneously across the galaxy (darn, there goes the plot for at least one of my published stories) and I had to spend a bit of time thinking about why that is. Perhaps it's just so obvious to him he felt it didn't need explaining. I think I get it now...

Oh, and loath as I am to pit my 'O' level in physics against his brain-the-size-of-a-planet wisdom, it does seem to me he does get it wrong when he discusses precognition. This, he says, is definitely impossible because it transgresses basic Newtonian physics; it short-circuits cause and effect. But then he also says "In principle, Newtonian mechanics states that if you had a large enough computer, you could compute all future events". So, if you could build such a machine then maybe you could predict the future... 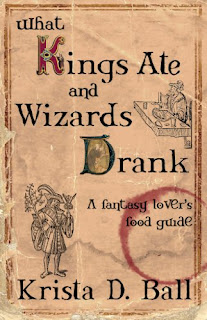 It's partly written for writers, but readers of fantasy (and other genres) will find it a blast, too. It bills itself as "equal parts writer’s guide, comedy, and historical cookbook" and that's about right. It's an entertanining and informative read, and I was constantly reminded of episodes in fantasy books I've read where the characters have no trouble living off the land - despite all the very real difficulties that would entail.

So, if you're interested to know how your party of adventurers could survive in the wildlands as they search for the mythical Orb of Raan, or how that dwarvish army could march upon the orc homelands without dying of starvation on the way, this is the book to read. I found I was constantly given cool ideas for scenes and chapters, too. Definitely a book to come back to.

I did enjoy reading about the sociological, technological and economic background to the foods people ate in the past. Plus, there were some good jokes. Also, plenty of things described that I definitely would not want to eat or drink - but which characters in some fantasy story might. The poor things.

If you're interested in world-building a fantasy or a period romance universe, or you're simply fascinated by what and how people in former times used to eat and drink, this book is well-worth checking out.

It's available from Amazon and all good book stores.


Happy Holidays from the folks at Untethered Realms, all!
Posted by Simon Kewin at 3:30 AM