Speculative Fiction Worth Reading: Through the Lichgate (The Drama Club Presents) 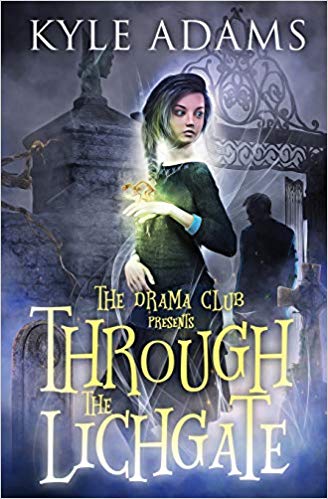 Looking for something to read for Halloween? You won't go wrong with Through the Lichgate, the first installment in Kyle Adams's The Drama Club Presents series.

Thana Ayers, high school student and part-time graveyard caretaker, is trapped by her own talents. She is a necromancer, not by choice, but because she can animate and control dead bodies, both human and animal. She could do much more. She could enslave the souls of the dead to create liches, who would do her bidding. Instead, Thana users her talents to destroy the liches that attack her. Thana draws the line at enslaving souls.

When her older brother, who died in a tragic accident, turns up as a lich, Thana's world and her morals are turned upside down. Another necromancer forces her to make choices and compromises to save herself and her friends. The question is, how far will Thana cross her lines in the sand?

Through the Lichgate is an exciting and compelling YA paranormal and there's no romance. With the problems Thana is facing, she has no time to even think about a boyfriend. Adams has created a situation in which Thana must make hard choices between her principles, her family, and her friends. This story will leave you thinking about Thana's choices long after you've finished the book. My only problem with the story is the antagonist's motivation. It's a bit fuzzy as to why he's doing what he's doing. Another avenue into the antagonist's thoughts might have helped. Overall, Through the Lichgate is a fast-paced, compelling read with gut-wrenching choices for a likable protagonist.


Thana Ayers may seem like any other girl her age, struggling to balance schoolwork, drama club activities, and her religious parents. But at night, she battles unholy monstrosities with her own astonishing abilities to control the dead. Thana’s never lost a battle. That is, until a mysterious creature appears unlike any she has faced before.

This strange presence threatens to unravel Thana’s carefully balanced life and reveal her powers to the world. It also promises to show her the secrets of the lichgate and unlock her true power, but all power comes with a cost.

Dig it up on Amazon.