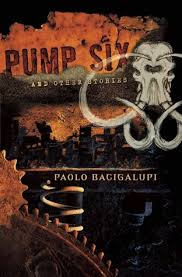 So, there’s sci-fi (science fiction), and cli-fi (climate science fiction), and now there’s bio-fi (biological science fiction). This last sub-genre is what Paolo Bacigalupi focuses on. He writes novels, young adult fiction and stories. And he’s my favorite fantasy/sci-fi writer. I’ve taught his stories in my classes now for years, and my students also love his writing. As twenty-somethings they feel the winds of change on their necks, and he’s describing it so articulately. His breakout novel was The Windup Girl, set in a future alt-southeast Asia. But if you want to start with something quick and easily digestible try his story collection Pump Six.


Two standout stories are Pocketful of Dharma and The Fluted Girl. These are lyrical yet sharp as tacks, wondrous yet horrifying, pure fantasy yet containing believable scenarios. In the first, we meet Wang Jun, a poverty-stricken beggar wandering the streets of old Chengdu. All he wants is to get to the top of a gigantic biomorphic city, It’s a living architectural structure, like a blob with a beating heart and arteries that a person can run inside of. It grows, it breathes, it oozes and it stinks. A strange foreigner gives Wang Jun a data cube and asks him to take it to a certain bridge and give it to a person wearing white gloves. I won’t get into a blow by blow synopsis partly because it gives away too much. Suffice it to say, the characters Jun meets and the origin of this strange cube will blow your mind. 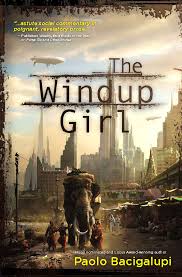 The Fluted Girl combines the torturous art of foot binding, with genetic enhancements designed to lure, kill, seduce and prolong life. It combines classic fairytale in that it’s set in a castle in the snow, yet it’s also sci-fi at its most savage. The girls—two sisters, Lidia and Nia—have been painstakingly crafted to stop growing at puberty, and have holes in their bodies at strategic points so that they can literally play each other like flutes. They perform at parties and produce beautiful music with an almost sexual crescendo. Their directress doles out drugs, which renders the audience lustful. Add in a mix of very nasty villains with quirky flaws, and it’s a recipe for a gripping thriller.

With geneticists able to grow body parts, celebs like Bette Midler cloning their dogs, and geneticists on the cusp of being able to literally go into one’s DNA code and reprogram the diseased parts, these Bacigalupi stories satisfy like little else. We just feel it. It's a déjà vu that exists in the future, an itch you can't quite scratch, but it’s oh, so close.
Posted by Catherine Stine at 5:43 AM