Books to keep you up at night! 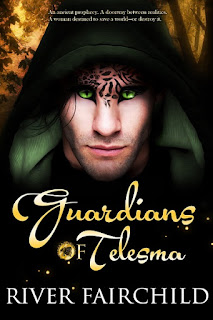 An ancient prophecy. A doorway between realities. A woman destined to save a world—or destroy it.

When Kate Ryan discovers an ancient artifact at a dig site, her life is changed forever. Swept across the boundaries of dimension, she’s plunged into an alternate world of magic, shape-shifting cats—and a prophecy calling for her death at the hands of the Guardian.

Draven, Guardian of Telesma, took an oath to kill the Outsider whom the legend warns will destroy his world. He hesitates as his attraction to this woman proves stronger than his sense of duty. Now he must protect his sworn enemy against his own people as he struggles to prove the prophecy wrong.

Kate faces an impossible choice. Stay and try to save those who refuse to accept her, or turn her back on them and the man who’s captured her heart? If she makes the wrong decision, will it bring about their destruction?

Thanks for joining in the Realms Faire and playing the Phasers game! I was delighted to see many of you as winners: Nick Wilford, Olga Godim, Birgit, Michelle Wallace, and Elephant's Child! 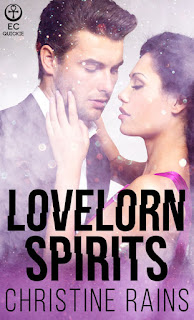 Lovelorn Spirits (The Paramours #3)
The Paramours - ghost hunting with a kiss.
Vivian Ray does not like working with the suave Miles Walker, but he's the best medium in the paranormal business. When they are possessed by a pair of passionate ghosts, Vivian and Miles realize they might have feelings for one another. But it's difficult to separate their own emotions apart from the spirits', and Vivian doesn't want to believe she's in anything more than lust with Miles. There's something much more dangerous after them, though, and if they can't help the ghosts work through their past, the investigators could lose their own lives.
Pre-order here: Amazon * Kobo * Goodreads
Posted by River Fairchild at 12:00 AM