The Woman on the Webcam

I started wondering about looking at the webcam and seeing the same person every time I looked at the site. Who would this person be? What if she was always alone, even in the dark of night? And what reason could she have for being there?

As you can see from this screencap of the webcam, Aquinnah is a friendly and unassuming place during the day. If you were standing on these steps and facing the cars, the ocean would be off to your right and straight ahead. The sound of the waves below you is awesome from this location. 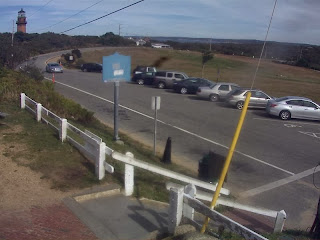 But it's a whole different story at night. 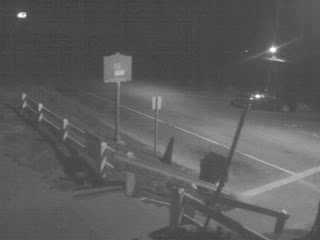 With the exception of the lone security light and the lighthouse beacon, there are no lights at Aquinnah at night. The more I looked at the cam, the more I thought that this would be a perfect place for ghosts to roam about. I started playing with that idea, and eventually The Ghosts of Aquinnah was born.

The following excerpt takes place after my character Hannah first sees the woman dressed in 19th century clothing on the webcam. She starts to wonder, who is she? And why is she there?


Unable to stop thinking about the mystery woman, Hannah tried again to come up with a reason for her dress. Perhaps she belonged to one of those religious groups where women dressed conservatively. But that wouldn’t explain what she was doing alone at the lighthouse in the dark of night.
Hannah realized it wasn’t just the woman’s presence that had seemed odd to her, it was also her demeanor. The woman was very young, but she looked overwhelmed with sadness. Hannah set down the glass, suddenly worried that perhaps the woman had gone to the cliffs to commit suicide. Was that why she’d never returned to the stone steps? Had she jumped from the cliffs into the sea?

Hannah didn’t find that likely. The overlook was fenced in, and the ground below it was more sloping than steep.

Hannah shook her head and finished her water before putting her glass in the sink. Why was she trying to figure out what this woman was doing? What concern was it of hers, anyway? If the woman wanted to dress oddly and wander around the island at night, that was her business.
As she headed back to the bedroom, she could imagine Jon saying that she was fixating on this woman as yet another excuse to avoid her work. He wouldn’t be wrong. But as she turned off the kitchen light she realized what it was that had struck her the most about the woman on the webcam. It wasn’t just her dress or the sadness that was so plain on her face.
It was that in spite of the fact that she seemed to be so lost and alone, she moved with a purpose and sense of determination that was evident even through the lens of the camera. She looked like she was looking for something. Or like she was searching for someone. 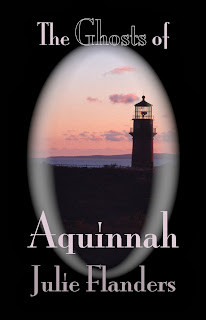 A brilliant flash of light transcends through time.

Another freezes a cloaked figure within a frame of salty mist as waves crash against a rocky shore. Her harrowing expression shadows the beacon to a pinprick.

By the next blaze, she is gone. Only the lighthouse remains.

Hannah’s eyes blink in step with each heartbeat. Images of her deceased parents and Martha’s Vineyard explode like firecrackers inside her mind.

She shakes her head.

For weeks this eerie woman dressed in nineteenth century garb has been haunting my webcam, but tonight she stared into my soul.

Casting aside months of research on historic lighthouses, Hannah drives to the coast and boards a ferry.

What is the strange connection she has to this mysterious woman suspended in time?

But, it’s not at all what she expects...


The Ghosts of Aquinnah will be released on December 5, 2013 by Ink Smith Publishing. Order now at:


Author Bio: Julie Flanders is a novelist and freelance writer in Cincinnati, Ohio. She has a life-long love affair with the ocean and has spent more summer vacations than she can count on the island of Martha’s Vineyard. When not writing, Julie can be found playing with her pets, reading, cheering on her favorite sports teams, and watching too much television. The Ghosts of Aquinnah is Julie’s second novel. Her debut novel Polar Night was released in February, 2013 by Ink Smith Publishing.

Email ThisBlogThis!Share to TwitterShare to FacebookShare to Pinterest
Labels: Books, Julie Flanders, The Ghosts of Aquinnah