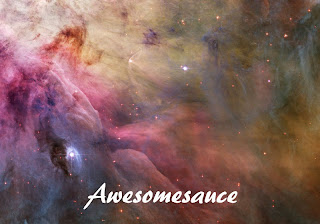 Check out what the talented authors of Untethered Realms do with this writing prompt!

Angela Brown:
What in the out-of-this-world is awesomesauce? Well, my friends, it is a generous helping of wonderful kneaded and blended with countless dollops of extreme unicorn joy. This concoction collides with a supernova creating the biggest, baddest, bestest show of fireworks ever. It's so awesome it can't stop with just awesome. It's awesomesauce.

Gwen Gardner:
Three Witch Sisters gathered ‘round the bubbling cauldron. They sniffed through schnozzles, pointed and long, like the hats atop their knobby noggins. Fangs snarled and snapped, growled and grunted after wisps of euphoria escaping in twirls and swirls into the inky night sky. Stir and sip, pass the dip. Stir and sip, pass the dip. Stir and sip-- “Tis a dash it needs, of something more…” said One.“Bat wing?” asked Two.“Dragon’s breath?” added Three.“No,” said One. “Mayhap a dash of--” Shake! Spill! Splash! “--chocolate.”“What be the name of this concoction?” asked Two, a frown betwixt narrow eyes. “Awesomesauce.” Nods bobbed all ‘round.

Mary Pax:
A million points of light reflected in his soul, peering at me like a newborn galaxy. The stars burned, imprinting eternity deeper than my bones. I sighed.He breathed me in, “I’ve a thousand wonders to show you.”With a gaze like that, I’d follow him to the next twelve universes. Yet all I could say was a goofy, “Awesome sauce.”

Christine Rains:
The recorded chanting on the iPhone weakened the monster enough that the first hit didn't crush his skull. With the world blurring, Imri stood as the furry beast turned its back to him. It was stupid as well as ugly. Yet he didn't dare smile until he thrust his sword through the monster's back, and it imploded with a wet pop.Covered in warm goop, Imri turned with a hop and grinned at his Master. "Awesomesauce."

Cherie Reich:
Ingredients:1 Chosen One2-3 Sidekicks1 Mentor1 Master Villain½ cup of dragon’s breath¾ tablespoon of castle dustA dash of magicA sprinkle of secretsDirections:In one bowl, take one Chosen One and sift with two or three sidekicks until they become best friends. Throw in one mentor and allow the mixture to become wise. In another bowl, blend the castle dust and dragon’s breath together until they crumble. Add to the first bowl. Add a dash of magic and sprinkle of secrets to the mix. Pour mixture on a flat surface. Spread the group thin and knead the Master Villain in, until chaos ensues. Bake for a trilogy at 400 degrees, or until the Chosen One rises and defeats the Master Villain.

Catherine Stine
Awesome sauce is a blend of Tabasco, Red Bull, Burberis Vulgaris and magic sparkles. Witches sip it from black buttercups on the eve of the full moon in order to perform spectacularly successful spells. They can make porcupines waltz, humorless yawners transform into standup comics and wallflowers blossom into flowery debutantes. An Awesome sauce spell can even make an orangutan trilingual!

River Fairchild:
Jezebel studied the unicorn with a twitch of a smile. He noticed and stomped his feet, his silky black coat sparkling with pinpoints of starlight. Blood-maddened eyes narrowed as he lowered his horn in her direction.


She spared a tiny yawn and flicked her tentacles at him. "It seems you drank too much punch, my ill-tempered friend. It tasted like pure awesomesauce going down though, didn't it?"


Ellie Garratt:
“I didn’t expect to see you here,” Bertram said.
“Took a wrong turn,” Giles replied.
“But didn’t you have that other contract to take care of?”
“It can wait,” Giles said, then pointed to a small cluster of planets in front of them. “End of the world job?”
“Yep,” Bertram sighed.
“Want me to take care of it?”
“If you like.”
“Awesome sauce!” Giles cried, making Bertram jump – if causing a supernatural entity to move a few hundred thousand miles could be called jumping.
Bertram soon came back. “Not funny.”

Posted by Christine Rains at 2:00 AM