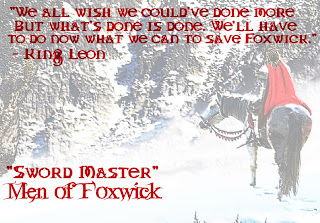 Fallon had never seen so much blood. The drying crimson liquid splattered the walls of the ladies’ embroidery room and seeped into the rugs. He skirted around an overturned chair. A handkerchief caught his attention, and he picked it up. Princess Umbria’s delicate touch had crafted the fox upon the fabric, the creature now blood-drenched. He tiptoed around the chaos as best he could to the cloth-draped bodies.

Four corpses lay prone upon the floor, but they were a small number of the ones killed in the attack. He’d already seen King Javen’s body. While Fallon had hunted in Greymist Forest, Wintermill’s assassins had murdered the elderly king in the throne room along with three guards before they continued their rampage throughout the castle.

Why had Wintermill attacked now? Fallon dug his nails into his palms. Five years had passed since Queen Eirwyn had tried to use dragons to threaten Foxwick. As far as Fallon knew, no one had heard of the sorceress queen since that time.

He clenched his jaw as he knelt beside the first corpse and peeked under the cloth. The woman had once been a blonde, but now red coated her strands. He’d barely known the lady-in-waiting assigned to nine-year-old Princess Umbria. The fabric slipped from his fingers and covered her. He stood and moved to the next body, but this woman was a lady-in-waiting assigned to Umbria’s mother, Princess Kalinda.

The other two bodies had to be Princess Kalinda herself and Prince Tristan. Fallon’s hand hovered over the cloth. He breathed in to quell the shaking, but his fingers still trembled. If only he hadn’t been hunting during the time Wintermill attacked, then he could’ve stopped these assassinations. As sword master, it was his duty to keep the royal family safe. He touched both cloths and revealed the corpses of the prince and princess at the same time.

Prince Tristan’s crown had fallen off. His face appeared lax in death, almost as if he slept. Although Fallon didn’t move the sheet lower, he had heard the prince’s wounds were in his abdomen. He’d been trying to protect his wife and daughter. If Fallon had been there, would the prince have succeeded?

Princess Kalinda’s black hair had come loose from her extravagant braid. Her eyes remained open, unseeing, and Fallon reached down and closed the lids. She appeared so pale, even her normal ruby red lips had drained of color. He swallowed his grief. Those lips reminded Fallon of his wife’s when she died in childbirth last year along with their son.

He covered the royals and stood too quickly. The room spun in his vision, and he gripped a nearby chair to steady himself. What good was a sword master who had never fought in a battle? Fallon needed to pull himself together and be strong. Foxwick had been on the edge of war many times. The kingdom would find a way to thrive under Prince—no, now King Leon’s reign.

Fallon would have to help the nineteen-year-old king. Although Fallon had failed the majority of the royal family, two royals remained. King Leon and Princess Umbria were his main priority. War was brewing, but Fallon wouldn’t stand by and watch Foxwick fall. 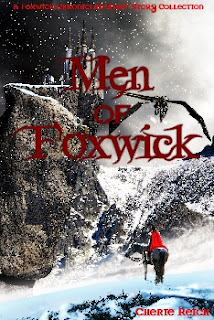 This fantasy short story collection features five men from the Kingdom of Foxwick.

A blind teen seeks a place in the kingdom. A dragon seer journeys to Wintermill to spy on the queen. A sword master’s worst fear comes true when he fails to protect the royal family. A king falls in love with an herb witch, but will she feel the same way? A hunter will rise to the challenge to hunt down a man-eating monster.

Also, I have a special announcement for my email newsletter subscribers. Click here to sign up for my updates and receive a coupon for a free copy of Women of Foxwick.

For more information, please visit my website and blog.
Posted by Cherie Reich at 5:00 AM